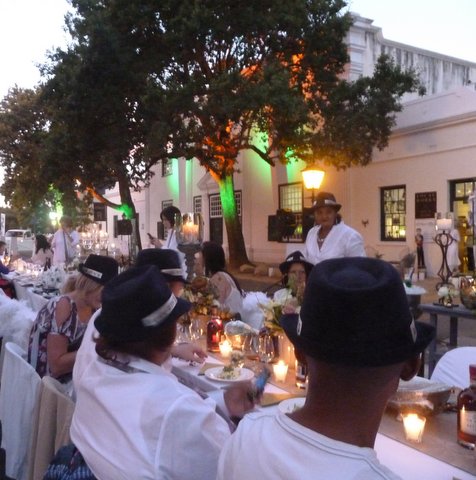 It was ‘opskop’ time in Stellenbosch when the new Stellenbosch 360 brand identity was launched at a festive street banquet this year.

Historic Drostdy Street was transformed with tables draped and elegantly decorated in white, people in festive mood and the best of local talent belting out well-known songs, while musicians set the mood under a starry sky. Stellenbosch 360 Street Banquet

Great fun was had by all and some lucky revellers were awarded prizes for ‘Best Dressed’, ‘Best Hat’ and ‘Best Table Décor.’

Stellenbosch 360 is an Article 21 Company governed by an inclusive board of directors, which represents a broad spectrum of stakeholders. A number of strategic goals and key programmes were identified and can be summarised in the brand essence, ‘Inspiring Experiences’, which captures the spirit and soul of a multi-faceted and dynamic Stellenbosch.